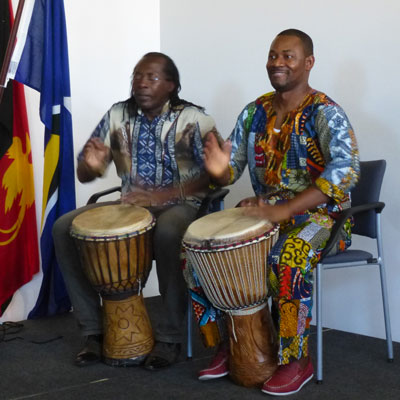 More than 150 people gathered at the Chapel of the Australian Centre for Christianity and Culture on Monday March 13 for the Commonwealth Day Multi-Faith Celebration.

The theme of this year's celebration was 'A Commonwealth for Peace' and included special messages from Queen Elizabeth, Prime Minister Malcolm Turnbull and the Governor-General of Australia Sir Peter Cosgrove. Former Governor of Western Australia and current Deputy Chair of the Australian Centre for Christianity and Culture Lieutenant General John Sanderson AC gave a reflection on the theme which can be read below. 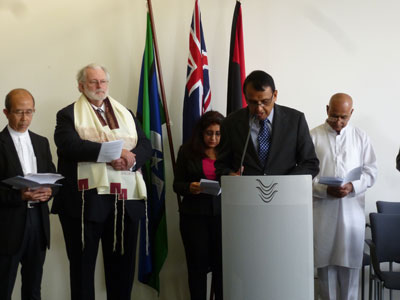 A joint statement from Bahá'í, Buddhist, Christian, Hindu, Jain, Jewish, Muslim and Sikh communities about the importance of peace was read on the day by representatives of the faith communities.

The event was not complete without Pacific Island, Chinese, Irish, Indian and African cultural performances by various local groups around Canberra. 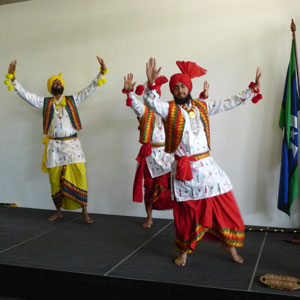 AUSTRALIAN CENTRE FOR CHRISTIANITY AND CULTURE

A COMMONWEALTH FOR PEACE

Each year, on the second Monday in March all member nations celebrate the Commonwealth of Nations. This is not normally a celebration in the sense of parades and fireworks. It is not that sort of organisation. Rather, it is a day when we reaffirm our commitment to a set of values - one that has emerged out of the shared experience of a group of sovereign nations over the last two centuries. 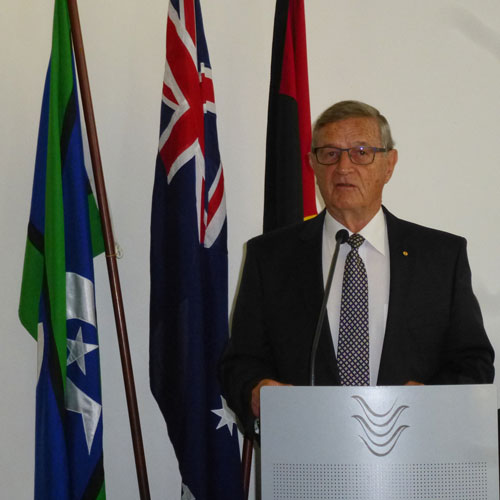 What we do celebrate is our diversity and the fact that a multi-faith and multi-cultural family of more than fifty nations can sustain a vision that is at once mutually beneficial and, at the same time, a significant contributor to the advancement of a global fraternity. The idea of the Commonwealth preceded the idea of the United Nations and many of those who built it were a part of the motivating force for the Charter in 1945 of this worldwide organization and, most importantly, for the vital conventions and protocols that continue to emerge from it.

The Commonwealth is a remarkable organization. It emerged from a desire on the part of former colonies to be free and independent, but it draws its strength from their recognition of the wisdom of remaining in collaboration with those who share what are essentially progressive values about justice, equality and opportunity.

To do this, the Commonwealth has chosen to be a very flexible organization with voluntary membership. But it has also recognized that its core values have to be clear and unequivocal and constantly reinforced. In 1971, after the emergence of many new nations, these values were expressed in a Declaration of Commonwealth Principles. These Principles have been honed and reinforced over the 46 years since.

Each year one of these core values is expressed in the Queens Message and becomes the guiding theme for Commonwealth Day. This year it is the message of Peace.

While the Commonwealth has been a constant contributor to the activities of the international community in the pursuit of peace, this theme has particular relevance now in the complex world emerging around us. Population growth, war and terrorism, inequality and shifting climatic conditions combine to make some among us fearful and less tolerant of people of different beliefs and appearance.

Would be leaders with extreme views find a growing audience in this climate. As we can see, the generation of political and economic power through the processes of inflaming those fears and passions often appears too tempting for such people. The risk for nations of losing their reason and humanity in this climate is thereby heightened and the likelihood of conflict is increased.

The destruction of civil society, built up on the hard earned experience of our ancestors, becomes a more distinct possibility. We know that some among us from other lands already share experiences of this kind and have chosen Australia as their homeland in the search for a better future for themselves and their families.

As the years have gone by the Australian people now more closely resemble the Commonwealth itself. Talented and industrious migrants from all corners of the world, and all faiths and races, have become Australians by choice. As we have seen today, their cultures make Australia a better place; more diverse, more interesting and more creative. There is nothing to fear here, provided we maintain our unity. There is no better way to do this than by adhering to the principles contained in the Commonwealth Declaration, which includes reaching out to the World in the pursuit of peace.

It is indeed an important time to reaffirm the principles that underlie both the Commonwealth and the United Nations. The vision for a Commonwealth for Peace anticipates these times of global transition and shows the wisdom of those who saw the opportunity for drawing together such a broad diversity of cultures and peoples.

At its core, as the Head of the Commonwealth, Queen Elizabeth, has observed in her message to us all, the search for peace is essentially about Justice. This is not simply justice before the law, but Justice in terms of equality of opportunity, a decent share of the fruits of labour and the freedom to express your beliefs and worship your creator. While stability may be able to be established by force for a short time, without such justice, we cannot be fully reconciled to each other and peace cannot be sustained.

Much of my military life was involved with these principles. In one particular experience, when I commanded the United Nations Force in Cambodia in the early 1990s, we sought to provide the opportunity for the Cambodian people to come out of the darkness of nearly a quarter of a century of civil war and genocide into the light of a liberal democratic sovereign state.

Cambodians could scarce believe that this was possible but the hope they expressed was the primary motivating force for the thousands of peacekeepers we took with us into this shattered land. Many of these were from Commonwealth nations and were thereby united in their understanding of the ingredients of just governance. When we were successful in our mission, every single one of us shared the euphoria of the people of Cambodia and were ourselves better people for it.

The experience for individuals of the emergence from darkness into such light is truly spiritual. Becoming a sovereign people also generates the feeling of becoming a part of the entire human race. The hope that comes from joining a great fraternity stimulates an appetite for better things. A sense that anything is possible becomes very tangible and the creative urge springs forth from human beings.

Those of us who share a spiritual background of whatever faith know that these feelings of hope and creativity lie at the core of our humanity. Here at the Australian Centre for Christianity and Culture, not unlike the Commonwealth, we pursue a vision of wisdom for the common good. We aim to build a great meeting place here at the centre of our nation's capital. Our hope is to share this vision through dialogue and example across all belief systems and sectors that make up Australian civil society.

This vision embraces Australians old and new but seeks especially to engage with and learn from the First Peoples who nurtured this continent for thousands of years before the rest of us sought peace and opportunity on its shores and across it mountains and spacious plains.

Love of country and love of each other shouldn't be too difficult in such a wonderful environment. Being a part of the Commonwealth helps us to understand the fundamental belief that love and respect in all their dimensions transcend fear and intolerance in the pursuit of global peace.

The Commonwealth includes many of the world's poorest and smallest countries, and its peoples embrace all the world's major racial groups. The Commonwealth is also committed to the solution of problems by negotiation, and to the guidance of policy through principle. It strongly supports the United Nations system and the global moral code contained in the UN declarations. Consequently, the Commonwealth has become a powerful voice in international forums, and has come to be known as a global opponent of racism, a promoter of democracy and good governance, an advocate of human rights and gender equality, a champion of small countries and participation of young people in development and a determined negotiator in working towards global economic systems which give a fairer deal to the poor.