The Spiritus Short Film Prize is an initiative of the Australian Centre for Christianity and Culture as part of its commitment to promote the lively interaction between arts, sciences and culture; one of the Four Pillars of the Centre’s work and mission. The Centre believes that there is wisdom to be found in such an interaction which can contribute to a vision of hope and the common good for Australia.

The biennial prize began in 2015 as the Religious Short Film Prize but was renamed as the Spiritus Australia Short Film Prize in 2020 to better reflect its purpose and aims. The 2022 winners have now been announced. For full information visit about.csu.edu.au/spiritus In 2019 the Australian Centre for Christianity and Culture became the permanent home to an important collection of paintings bequeathed by the late Harry Wallace, and presented by his family. The works all have one theme in common – we at the Centre lovingly know them as – the laughing Jesus paintings.

The collection was commissioned by Pat and Harry Wallace and Sir Maxwell Macleod inviting artists from around the world to contribute. The paintings can be considered eclectic with 34 artists from 17 countries across four continents represented. The curators’ inspiration was to depict Jesus from the perspective of his everyday life and his relationship with the community, young and old. In this way Jesus is not depicted in the usual manner of sombre, harsh, tortured and suffering. He is instead showing a lightness of spirit, enjoying all around him in a joyful embracing manner.

The Centre exhibited the collection for the first time from 12 November to 5 December 2020. The Bible Garden is located within the precincts of the Australian Centre of Christianity and Culture.

It was established with a benevolent grant from The Bible Garden Trust, a perpetual trust established by the late Mr Gerald Hercules Robinson. The purpose of the trust was to create and maintain gardens that feature the botany that is described in the Holy Bible, and through this activity to educate Christians, particularly young Christians, in the Scriptures.

Further information on The Bible Garden can be found here. A commitment to Indigenous Reconciliation has been part of the vision for the ACC&C from the beginning. An ecumenical centre serving the people of Australia meant that the First People had a key place in the Centre's engagement with Australian culture.

Further information on Indigenous Reconciliation can be found here. 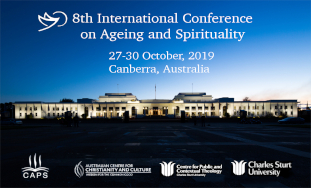 Further information on this Conference The Centre for Ecumenical Studies as part of the Australian Centre for Christianity and Culture (CSU), together with The Australian Catholic University's Institute for Religion and Critical Inquiry and the Research Centre for Public and Contextual Theology (CSU) are pleased to invite you to the 4th International Conference on Receptive Ecumenism, 6-7 November 2017 in Canberra.

Further information on the Conference In 2015 the Centre will host a major public dialogue in Australia on Islam and Christianity. This dialogue will take place in various capital cities.

Further information on Can Christianity and Islam Co-Exist? A National Dialogue can be found here.