The history of the Australian Centre for Christianity and Culture is interwoven with the history of Canberra, the national capital of Australia. It is located on the land cared for over the centuries by the Ngunnawal people. 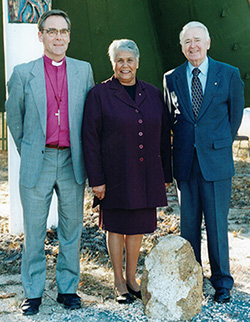 The Centre was developed from a vision for a national ecumenical centre and place to promote reconciliation. This involved three key people: the then Anglican Bishop of Canberra and Goulburn, George Browning; the Governor General at the time, Sir William Deane; and nationally respected Aboriginal leader Lowitja O'Donoghue (pictured). A natural partner for this vision was Charles Sturt University with whom the Diocese had established a School of Theology (based on St Mark's National Theological Centre) in 1995.

The initial vision of the ACC&C included:

The Centre is located on land originally allocated to the Church of England (now the Anglican Church of Australia) in 1926 to build a national Anglican Church. In 1927 the site was dedicated for St Mark's Cathedral, however it was never built due to lack of funds.

In 1995, the Anglican Church entered into agreement with other Christian churches in Australia to develop the site together and in consultation with the local Indigenous community. A ceremony was held on 4 November 1995 to dedicate the site in the light of this new vision.

A foundation stone was laid in 1996 and a Tent of Meeting (now the Place of Meeting) was erected focusing on a simple campfire and three sculptured poles depicting different aspects of creation and Christianity.

On 2 June 1998, the Centre was established under the authority of Charles Sturt University in collaboration with the Anglican diocese and with the approval of the National Council of Churches in Australia. In 1999, the Reverend Dr David Millikan was appointed the first Executive Director.