The Australian Network for Spiritual Direction Inc (ANSD) is an ecumenical organization founded in 1989 to foster and support the ministry of spiritual direction and companionship.  Spiritual direction takes place when one person accompanies another in their unique life journey offering a sacred space where our heart’s deepest desire for communion with God, each other and all creation is heard, awakened and nurtured.

Key activities of ANSD include:

In Australia this ministry is offered by qualified people from diverse backgrounds and traditions, united by our commitment to contemplative living. We welcome as members not only those qualified as spiritual directors or supervisors and those interested in spiritual direction but also all those wanting to explore the spiritual journey.

ANSD is run by an elected executive comprising the National President, Secretary and Treasurer, plus members representing each of the regional groups throughout the country. The local representative in the Canberra region is Annie Patterson who arranges workshops and convenes quarterly Quiet Days through the Australian Centre for Christianity and Culture. For regional contact details and more information about ANSD and its broader activities and resources, including its online e-journal, Coolamon go to www.ansd.org.au

A Chorus of Women 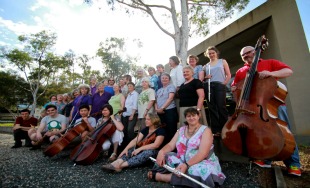 Since the beginning of November 2015 Canberra's A Chorus of Women has been meeting in rehearsal and performance spaces in the grounds of the Australian Centre for Christianity and Culture.

The residency began with the signing of a Memorandum of Understanding between Chorus women and the Centre's Executive Director, Professor Stephen Pickard. The agreement recognises many years of shared commitments to seeking wisdom for the common good. The Chorus maintains its independence and non-alignment with any religion or political group.

The Centre welcomes the Chorus' objective of 'skilled use of the arts to engage the community in public policy dilemmas by portraying the ethical dimensions of issues and foretelling the human consequences of decisions'.

The Chorus and Centre are both committed to respecting all spiritual traditions. Among our shared active interests are peace making, relations between people and Earth, reconciliation and respect for Indigenous Australians, speaking out about violence against women and children, engendering wise responses to refugees and climate change and regenerating wellbeing in the spirit of our city as our hometown and our national capital.

Further information on A Chorus of Women can be found here - www.chorusofwomen.org

Christians for an Ethical Society (CES)

Typically, public lectures organised by CES have been hosted at the ACC&C. Currently, the President of the CES is Professor John Warhurst AO and the Rt Rev. Dr George Browning, Chair of the CES, is an Ambassador of the ACC&C and has been seminal in its foundation. The Executive Director of the ACC&C was, in 2014, appointed as a member of the committee of the CES. There is significant overlap in the vision and aspirations of both CES and the ACC&C. Both entities focus on the common good and associated concerns for wisdom, social justice and Christian engagement with the issues of the day.

Over the years, CES has conducted many successful forums on a range of social justice issues that have gained the interest of committed people in the Canberra region. The objectives of CES are to strengthen social justice and ethical structures in Australia, to promote social justice as a core Christian value and to further public education on current social justice issues and the Christian perspective on them. Central to CES's idea of an ethical society is the idea of common good.  In turn, the idea of common good springs from the Christian theological position that this is a relational world under God and that the life of any part is to be seen in the context of the wellbeing of the whole.

Further information on CES can be found here - www.ces.org.au

The Australian Centre for Christianity and Culture is host to the Director of the Public and Contextual Theology Strategic Research Centre (PACT), of Charles Sturt University and scholars of the ACC&C belong to the research centre.

Public theology is concerned with the analysis and public expression of the Christian faith, and its implications for the whole of society and the environment.

Contextual theology refers to analysis of the way theology has been conceived in particular contexts. It is concerned with the interaction between universal themes in theology and issues relating to the particular context in which theology is developed.

In Australia it is particularly concerned with the effects of dispossession of the lands of the indigenous peoples and the ongoing process of reconciliation.

Further information on the PACT can be found here - www.csu.edu.au/research/pact