Bonegilla is on the southern bank of the Murray River just above Hume Dam, about 9km from Wodonga in north-east Victoria and about 12 km from Albury in southern New South Wales. 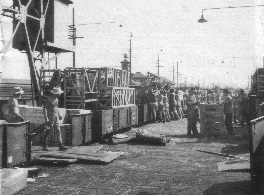 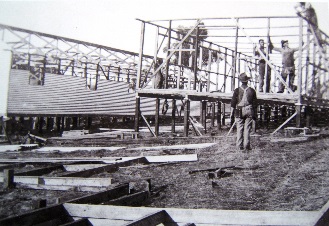 In 1940 a large army camp and military hospital were built at Bonegilla and a huge ordnance base was built nearby at Bandiana. The camp was used to train troops during the war. The hospital cared for them and for wounded soldiers returned from the battle fields. The ordnance base stored and supplied military equipment and vehicles. This was a convenient location for such activities because there was a break in the railway break-of-gauge between the two states. Men and equipment could be sent quickly north or south from this strategically important place. 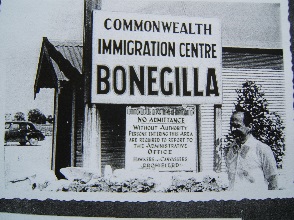 In 1947 the Bonegilla Army Camp was re-used as a reception and training centre for the first contingents of displaced persons who Australia admitted under an agreement with the International Refugee Organization after the Second World War. Altogether Australia took 170 000 of Europe’s displaced who were unable to return to their former countries after the war. Over half of them, 91 000, were received at Bonegilla. From 1952 to 1960 Bonegilla took in assisted non-British migrants and refugees. It was signposted as the Commonwealth Immigration Centre, Bonegilla, but known as ‘Bonegilla Reception and Training Centre’. From 1960 it was rebadged as the ‘Bonegilla Reception Centre’ and took in more migrants and refugees ─ almost entirely from non-British European countries. Altogether, from 1947 to 1971, when it closed, Bonegilla took in about 310 000 new arrivals. It proved to be the largest and longest-lasting reception centre in post-war Australia through the years when the economy was growing rapidly. These new arrivals changed the face of Australian society. They and their descendants have shaped the Australia of today. In May 1990, the remnant Block 19 of the 24-block centre was put on the Register of the National Estate. As a registered place of ‘special value to future generations’, it was protected from demolition or major change. In 2002, it was put on the Victorian Heritage Register and prepared as a ‘commemorative place and tourism venue’. In 2007, it was included on the National Heritage List as a place of ‘outstanding heritage value to the nation’. A two-metre plaque declared the former reception centre ‘a symbol of post-war migration which transformed Australia’s economy, society and culture’.

Block 19 has been developed as a public memory place for as many years as it operated as a reception centre. It is a special place which attracts visitors wanting to reflect on the experience of being a migrant.