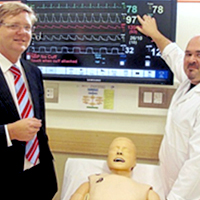 In 2012 Charles Sturt University started working with its local communities to explore the problem of ongoing doctor shortages in rural and regional areas.

Despite the investment of billions of dollars by the Federal Government in rural doctor programs, the proportion of doctors in rural areas continued to be half that of the cities, and rural people continued to suffer from higher rates of chronic disease and lower life expectancy.

Arising from this discussion, a plan was developed to establish a new rurally based medical school in the Murray Darling.

Attracted to the strength of the planned solution, La Trobe University joined the initiative in 2013 to include a new campus in northern Victoria.

The concept was different to other medical programs operated in rural Australia, in that it would be a multi-regional program (with campuses in Orange, Wagga Wagga and Bendigo and medical training centres in Albury-Wodonga, Bathurst, Dubbo and 15 other rural towns); 80% of the students would be from rural areas or Indigenous (more than 3 times more than the national average); students would be assessed on their commitment to rural practice as part of their application; the program would run over 6 years (rather than the normal 4 years offered in major cities, to ensure our graduates were well prepared for rural practice); and students would be educated and trained mainly in rural locations (once again, unlike other rural programs, where the majority of students spend just 4 weeks in a rural area).

The discussions led to the formation of a Community Consultative Committee chaired by a former State President of the CWA, and the establishment of a joint Doctors4theBush campaign to inform rural and regional communities about the issues, and to give people an opportunity to discuss their experiences and lend their support. Over 50,000 Australians have signed up as supporters of the strategy – in what is believed to be the largest rural based online campaign in Australia, and the National Party has formally committed to deliver a new 'Murray Darling Medical School' before the next Federal election expected in 2017.