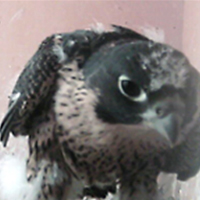 Some time in the middle of 2007 staff at the CSU Orange Campus noticed that a pair of peregrine falcons, relatively rare around the Central West of New South Wales, were interested in using the campus as a hunting ground. Ian Grange, a member of staff, suggested that a roosting box be mounted on the University's imposing water tower to encourage the raptors to hang around.

The Falcons took to the box very quickly and no end of carnage was brought in to consume.

The FalconCam Project was established to study, monitor and record the breeding and natural behaviour of a peregrine falcon family to provide a glimpse in to the life of a species until recently listed as “at risk”, and to bring research, pictures,videos and live streamed webcams to school students, the community and researchers around the world.

The project is supported by generous donations from the community, and support from the University.