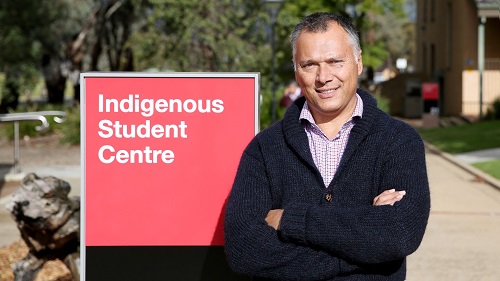 Join Stan as he outlines the four key themes of his award-winning documentary, The Australian Dream: History, Racism, Reconciliation, and Hope.

This series is best used as a follow-up to viewing the documentary. The Australian Dream is currently available on ABC iView up until 22 June, 2020.

Prior to this appointment, Professor Grant was Chair of Indigenous Affairs at Charles Sturt since 2016. But this was not the Grant family's only link to the University. Dr Uncle Stan Grant Snr, Professor Grant's father, is a Wiradjuri Elder and coordinator of the University's Graduate Certificate in Wiradjuri Language, Culture and Heritage.

Professor Grant has also worked in Global Affairs at Griffith University and has a highly respectable, 30-year career in journalism, including a former position as ABC's Global Affairs and Indigenous Affairs Analyst.

He is one of Australia's most respected and awarded journalists, with experience across radio, television news and current affairs. With a strong reputation for independence and integrity, one of his most significant positions was as a Senior International Correspondent for CNN in Asia and the Middle East.

Professor Grant has also published four critically acclaimed and best selling books on identity and Australian Indigenous history, and in 2019 wrote, and featured in, the full-length documentary film, The Australian Dream. The documentary won the AACTA Award for best feature documentary in 2019.

Learn more about studying with the School of Indigenous Australian Studies