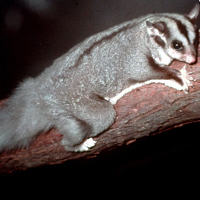 The squirrel glider is a small tree-loving marsupial that is struggling to survive as its regional habitat is being eroded by human population pressures.

The Squirrel Glider project is currently being run by Charles Sturt University and the Riverina TAFE.

It was funded by the Murray Catchment Management Authority through a Threatened Species and Communities grant.

The Squirrel Glider (petaurus norfolcensis) is classed as a vulnerable species in NSW by the Department of the Environment.

It has declined in numbers due to loss of habitat and predation.

However, it is to be found on the 87 Ha campus of Charles Sturt University in Albury-Wodonga, typically along a treed creek line that lies to the north of the campus and which is contiguous with the Riverina TAFE's National Environment Centre.

A grant received from the Murray Catchment Management Authority (CMA) allowed for a range of interventions to be undertaken to protect this threatened species.

The project has set aside 10ha of land for re-vegetation, and students and members of the community will work together to plant 1000 native tress to rebuild the habitat and help secure the future of this at-risk species.