The history of Charles Sturt University dates back to 1895, with the establishment of the Bathurst Experiment Farm. Formed progressively through the merge of regional institutions in south-western and western NSW, CSU was formally incorporated on 19 July 1989 under the Charles Sturt University Act 1989. As one of Australia's newer universities, CSU has been built on a tradition of excellence in teaching and research spanning more than 100 years. 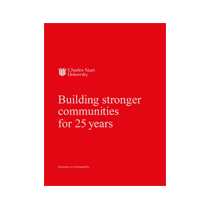