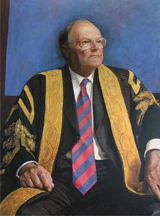 The Jiawei Shen portrait commissioned by the University was unveiled at a ceremony held in June 2009 in celebration of Charles Sturt University's 20th anniversary year.

The portrait is currently shown in the Council Room of the Chancellery at Charles Sturt University in Bathurst.

The artist Jiawei Shen was born in 1948 in Shanghai, China. Art schools were closed during the period of the Cultural Revolution, so Shen was largely self-taught and by the mid 1970s his artistic ability was recognised. One of his works from this era, “Standing Guard for Our Great Motherland” (1974) appeared in the China: 5000 Years exhibition in 1998 at the Guggenheim Museum in both New York and Bilbao.

Shen moved to Australia in 1989 and for the first two years supported himself financially by drawing sketches for tourists at Darling Harbour. He looked on this experience as an opportunity to research portraiture and since then he has completed many accomplished portrait commissions in Australia and overseas including the official portrait of Princess Mary of Denmark and a portrait of former Prime Minister John Howard (for the Australian Parliament).

He first submitted work for the Archibald Prize at the Art Gallery of New South Wales in 1992 and since has been selected for the exhibition numerous times. In 1997, Shen was runner-up for the first prize. He has been a finalist in the Doug Moran Portrait Prize and has twice won third prize in the Sydney Royal Art Show. In 1995, Jiawei won the Mary McKillop Art Award and received a medal from Pope John Paul II. 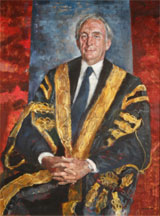 Two portraits of David James Asimus AO, the Foundation Chancellor of Charles Sturt University, 1989 - 2002 are hung within the University. One was commissioned by the University and the other by the Australian Wool Corporation. Mr. Asimus was the Chairman of the Australian Wool Corporation and the International Wool Secretariat from 1979 to 1988. During this period he led the wool industry into a position as Australia's premier export earner.

The commissioned portrait is by Judy Cassab. The Consultant Curator for Charles Sturt University in 1993, Mr. Graham Smith, wrote to Cassab asking if she would paint Chancellor Asimus. Cassab's positive response declares that she has just finished the portrait of Dame Leonie Kramer, the Chancellor of Sydney University, for the Great Hall and she would need five sittings.

Judy Cassab was born in Vienna in 1920 and arrived in Sydney in 1951 and showed at Macquarie Galleries from 1953. An accomplished and well known portrait painter, she has painted the likes of Dame Joan Sutherland, Sir Robert Helpman, Princess Alexandra, Queen Sirikit, Princess Marina and the Duke of Kent. She was appointed an Officer in the General Division of the Order of Australia in 1988, and won the Archibald Prize in 1961 and 1968. Her painting of Mr Asimus is the best official portrait in the University's Art Collection, and challenges the Sibley for interest and depth of feeling. Chancellor Asimus was an interesting and gregarious individual standing approximately six-and-a-half feet high. The portrait captures his towering stature and imposing character. 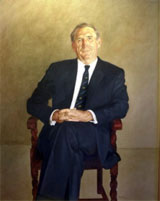 The Wes Walters' portrait commissioned by the Australian Wool Corporation was presented to Chancellor Asimus on his retirement as Corporation Chairman and placed on long-term loan with Charles Sturt University in 2002. As with many portraits, there are also sketches, which are very fine and are held by the sitter. The artist Wes Walters was born in Mildura in Victoria in 1928. He won the Archibald Prize in 1979 with a portrait of Phillip Adams. The tie worn by Chancellor Asimus, depicting numerous sheep is obviously a reference to his position as Chairman of the Wool Corporation. The portrait is hung in the meeting room, David Asimus Court on the Wagga Wagga Campus, in what formerly was the Head of Campus compound and Executive Centre, opposite the Caldwell of Professor Blake.