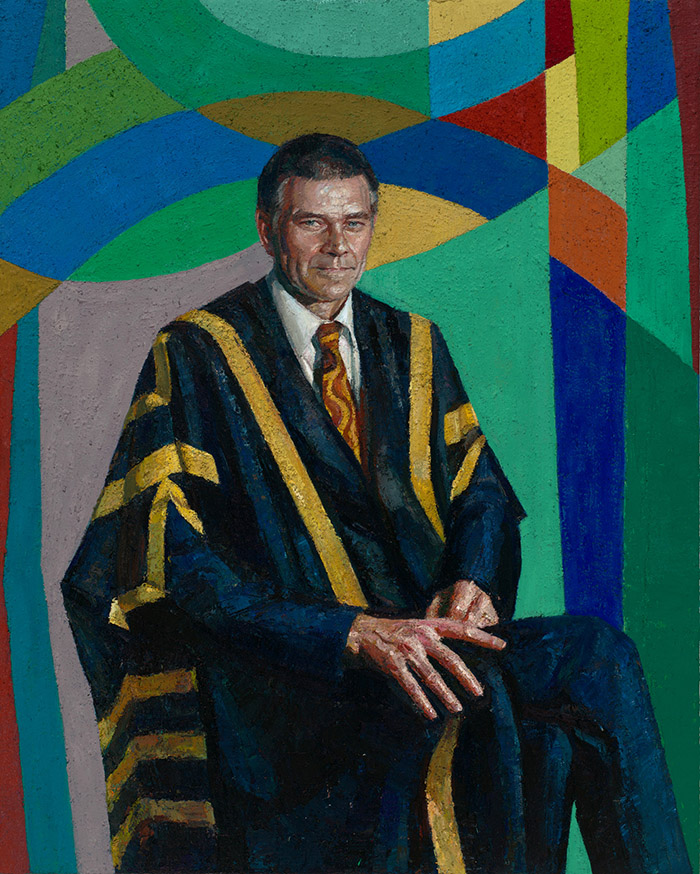 The first meetings, then three sittings between the Vice-Chancellor and the artist started on 25 November 2019 at the National Gallery of Victoria. Lockdowns, and COVID-19 breaks delayed the further three sittings for the portrait which were completed at the end of 2020, and the work was hung in The Grange board room in early 2022.

More detail about the artist 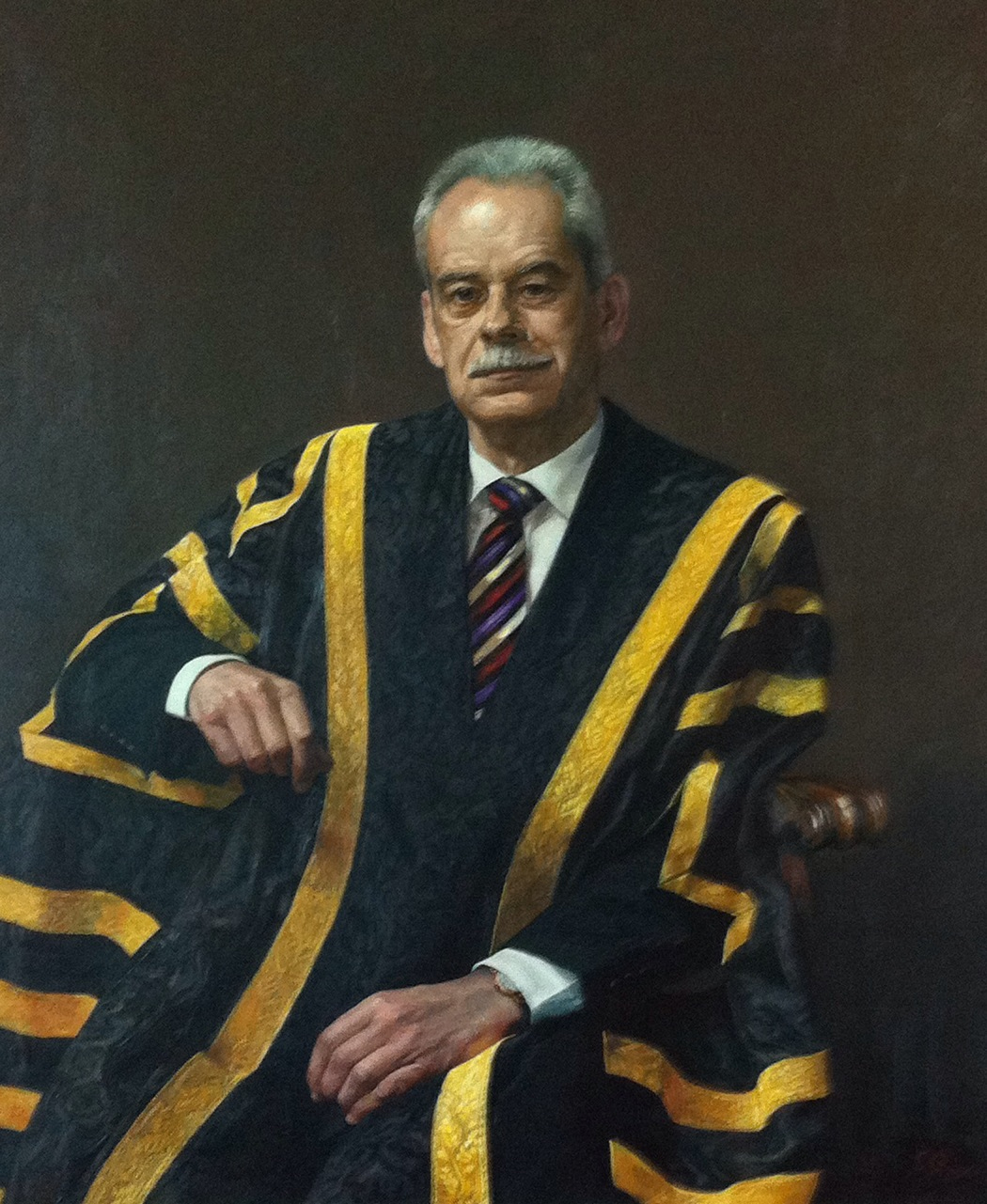 The Jiawei Shen portrait of Professor Ian Goulter was commissioned in 2010. The portrait hangs in the Council Room of the Chancellery at Charles Sturt University in Bathurst.

More detail about the artist

In October 2004, Andrew Sibley was commissioned to fulfil the above three criteria and paint a portrait of the Vice-Chancellor Professor Ian Goulter. A number of sittings were held, and discussions regarding the informal, leafy nature of the image were progressed. The painting now hangs in the board room at The Grange at Bathurst. 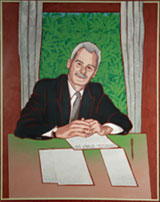 Sibley was born in 1933 in Kent, England, and arrived in Australia in 1948. In the late 1950s and early 1960s he was influenced by the artist Jon Molvig. Since that time he has taught, exhibited and played an integral part in the Australian art scene, living at one time in 'Dunmoochin', Clifton Pugh's property, showing and working with John Brack, George Baldessin, Charles Blackman and many other Melbourne art stars. Sibley is renowned as one of the country's leading portraitists, and has entered the Archibald Prize 21 times since 1958, possibly eclipsing John Olsen's impressive run.

Sibley's painting practice uses a transfer technique for paint to canvas with the use of a thin, transparent film. The technique brings a marvellous flatness to the paintings, and a transferred colour block similar to that of monotype printmaking. Many of the images within his paintings are symbolic. References to the wolf or the moon are usually self reflective. Within the Goulter portrait one may note the strong position of the sitter and his stable colour scheme, the 11th hour depicted on the Vice-Chancellor's watch face, the dense greenery as backdrop to the scene, and the pen and paper slipping towards the viewer. The pen, paper, and in some measure the shifting picture plane of the table, are direct references to John Brack's late pen and pencil paintings which reconstruct specific battles. It can be assumed this battle reference is connected with the Vice-Chancellor's role as the decision maker on campus, and the signer of deals. The University also owns two early charcoal and pen / ink drawings by the artist, purchased in 1968.

John Caldwell was born in Sydney in 1942; he held his first solo exhibition in 1978 at Bloomfield Galleries, Sydney. Caldwell is not known for his portraits; however, his landscape drawings are quite magical. Series of his works of Antarctica, France, or large open cut mines hold a serene, compositional tranquillity, and an almost mathematical rigidity. A long-time member of the Australian Watercolour Institute, his watercolours are some of his best work. 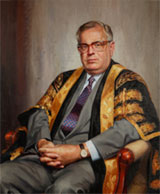 Professor Blake sat for Reg Campbell in 1996. Reg Campbell has painted numerous portraits for the University and its precursor institutions, namely: Evan Arthur Byron (Sam) Phillips BA, Med, DipEd, foundation Principal of Mitchell CAE 1969-1983; a double portrait of Jack and Dr Colleen McDonogh in April 1993; and the portrait of Prof. John Maxwell Collins, BA (Hons), MEd Admin, PhD, Principal of Mitchell CAE and a Pro-Vice-Chancellor of Charles Sturt University. Campbell's portraits are realistic, traditional and complex in their implementation. The artist is a portrait professional; the likeness of Professor Blake is uncanny. There is nothing within the images to challenge the spectator.